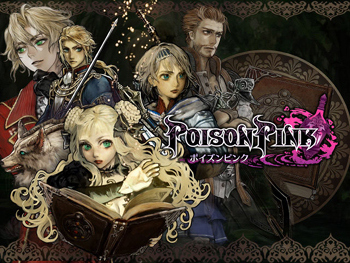 Or is it the tale of a priestess seeking her lost mentor?

Or is it the tale of a knight trying to rescue his royal fiancee?

The truth is... complicated.

A Dark Fantasy Simulation RPG developed by Flight-Plan for the PlayStation 2. It was released on 14th February 2008 in Japan (as Poison Pink) distributed by Banpresto and on 11th November 2008 in North America distributed by Atlus.

This game is notable for two things. First, it is Flight-Plan's first and only Strategy RPG to make it out of Japan, although only to North America. Secondly, it is a modernnote post-Persona Atlus game that does NOT contain the original Japanese voice acting. The latter was presumably due to the original game actually taking up most of the space on a single layer DVD and not having the room for two audio tracks.