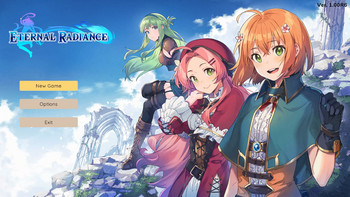 Eternal Radiance is a Unity Action RPG-Visual Novel hybrid developed by Visualnoveler. The game was officially released on December 15, 2020 for PC and on January 13, 2022 for the Nintendo Switch and Playstation 4.
Advertisement:

Celeste is a squire in the Ashen Order, an organization that keeps the peace in Darencia and secures dangerous Akleim artifacts. For her initiation, Celeste is tasked with retrieving an artifact in Ancora, but fails when a mysterious girl steals the artifact. Despite orders to stay at HQ to train further, Celeste decides to pursue the thief in order to correct her mistake.