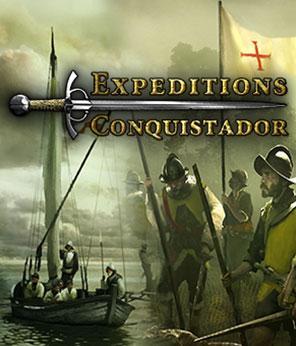 Expeditions: Conquistador is a single-player tactical Role-Playing Game developed by Logic Artists, an independent Denmark-based video game developer. The game was made out of passion, and partially financed through Kickstarter. The game was released in 2013.
Advertisement:

The story takes place in 1517, and you take control of a conquistador, and set up a team of your own choosing, for an expedition to mainland Mexico. On the way however, the ship is brought in on Hispaniola, and forced to complete tasks for the local governor. After completing a certain amount of tasks for the governor, the conquistador can continue his route to Mexico, and experience further adventures there. As one would expect, the path is riddled by obstacles, you have to secure food, medicine, keep up morale, and above all, keep your troops alive, as several random obstacles and story-based quests block your way.