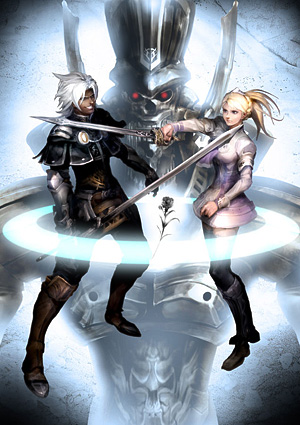 The first entry in the Chaos Rings series.

Four Battle Couples suddenly find themselves trapped in a mysterious place known as the Ark Arena. Their host, a being known as The Agent, informs them that they have been entered into a competition where they must fight to the death. The victors are awarded immortality and eternal youth. The losers—or those who refuse to play by the Ark Arena's rules—are condemned to oblivion. Thus, each couple must work together to survive the trials that lie ahead, discovering in the process just why they have been paired together and what the purpose of the Ark Arena is.

Each couple has their own playable scenario, each one revealing more about themselves and the nature of the Ark Arena, with a final chapter unlocked after at least one scenario has been completed. The battle system is turn-based, with playable characters given the option to act solo or together with their partner. Fighting in unison combines the power and abilities of both characters, but any attack received will target both of them.

Formerly available on the iTunes Store and Google Play, the entire series has since been removed from the App Store, rendering them unobtainable by anyone who didn't already own them.