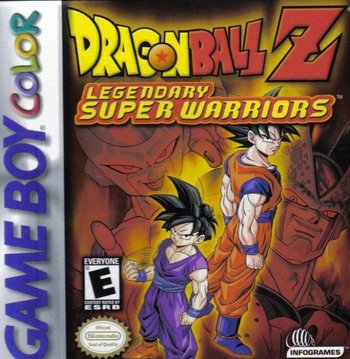 Dragon Ball Z: Legendary Super Warriors is a video game developed for the Game Boy Color, by Banpresto (published by Infogrames in EU/US) based on the popular Dragon Ball Z anime. It is a Turn-Based Card game that relies on 125 cards comprising of energy attacks, melee attacks, support cards, and defensive cards.

The game spans from partway through the Saiyan Saga all the way to the end of the Buu Saga. There are 27 character slots with most of the characters being able to transform into different forms. Later on, you can unlock additional characters and forms by using certain characters for particular fights.

There are 30 story mode missions and two side missions with one battle per mission.

There is a Battle Mode which acts as a skirmish mode of sorts and is unrelated to the story. There are three tiers of characters, and character can only fight their own tier.

There is local multiplayer and trading. In multiplayer you are free to play 1v1 and 2v2 battles as you like. The game becomes particularly interesting at this stage since players always act differently to the AI.