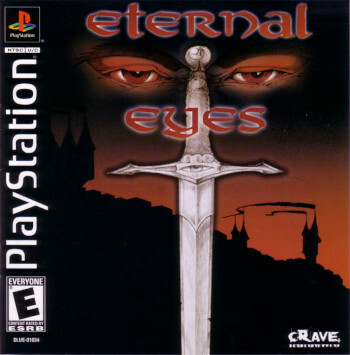 Eternal Eyes, known as Kouklotheatro (lit. "Puppet Theater" from Greek) in Japan, is a strategy/tactics RPG for the PlayStation. It is unusual in that it combines strategy gameplay with the Mons genre—all of your units (except The Hero, of course) are monsters (or Magical Puppets, as the case may be). It also has a unique, if complex, spell system.

Long ago, the Crimson Eyed tribe used magical jewels in order to bring puppets to life. These magical puppets served the Crimson Eyes and were their helpers, pets, and friends. However, people came to fear the Crimson Eyes for their powers. The people fled and their abandoned puppets grew wild.

Many years later, there was a great war where the people battled the great Goddess of Destruction, Luna. But she was sealed away. In the present day, however, a group of her followers are out to release her and wreak havoc!

It is in this chaos that Luke, a young boy from the kingdom of Gross, learns that he is a descendant of the Crimson Eyes. With the help of his friends, sister, and the magical puppets of yore, he must learn to harness his powers and become a hero!