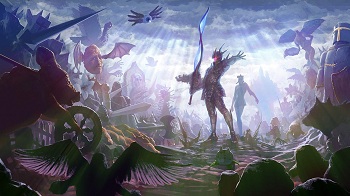 Black Knight Sword is a Platform Game developed by Grasshopper Manufacture and Digital Reality, as a whimsically dark and strange throwback to 8-bit and 16-bit 2D action platformers for PlayStation 3 and Xbox 360.

You take control of the eponymous Black Knight, Grahame Wormwood, in a fairy tale quest to stop an evil White Princess. Aiding him in this adventure is Black Hellebore, a spectre that takes form of knight's magical sword who can also help him perform double-jumps, cast spells, and solve puzzles. Black Knight Sword exudes a unique puppet theatre artstyle that looks like something straight out of Monty Python with dynamically changing backdrops and scenery.

The game was released on December 11th, 2012 for PlayStation Network and Xbox Live Arcade the day after. Has nothing to do with Black Knight staring Martin Lawrence. If you're looking for the trope of a knight in black armor, see Black Knight.