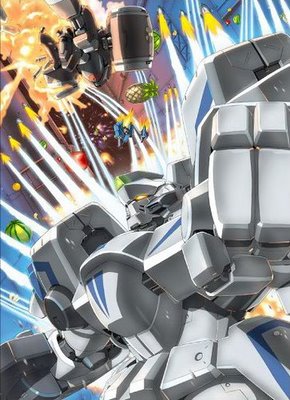 An action/Shoot 'em Up/Bullet Hell (sometimes) game series made by Treasure, consisting of 3 games: Bangai-O on the N64 (only in Japan) and the Sega Dreamcast, Bangai-O: Spirits on the DS, and Bangai-O: Missile Fury on Xbox Live Arcade. The N64 version had a limited run of about 10,000 copies, which makes it incredibly rare. The Dreamcast version was later released worldwide and is much more common.

Bangai-O is split into levels, and the goal of most of them is to run, shoot, fly, slash, dodge, shoot, and shoot (did we say shoot?) anything in your path until you destroy the targets of the level. Bangai-O is rather customizable, with Spirits allowing you to choose 2 of 8 or so missile types at a time and mixing or splitting them as needed. In addition to regular missiles, Bangai-O can perform an EX attack, which is a more powerful version of the regular missiles(EX attacks do not have to be the same missile types as your standard missiles).

Bangai-O follows the story of Riki and his sister Mami as they pilot Bangai-O against Gai and his Cosmo Gang, punishing them for the nefarious crime of...fruit contraband. What little story there is is told between missions or with dialogue during missions.

Bangai-O Spirits features the titular mecha from the first game, but the pilots have changed, to Masato and Ruri, who are visually expies of Riki and Mami. Spirits decides to ignore the concept of a plot at all, and the only dialogue is during the tutorial, after which you'll never see the pilots' faces again...unless you manage to beat a certain set of stages. At which point they come out to announce they only appear because the fanboys would throw a fit. Spirits features local multiplayer and a nice level editor, as well as a rather odd way of sharing custom levels... They're encoded in short sound files

which are played into the DS's microphone.

An Xbox 360 version by the name of Bangai-O: Missile Fury was released via the Xbox Live Arcade on May 4. It, so far, does not have the slowdown that the Dreamcast experienced despite having around 5000 moving things on-screen. It also has a level editor (like Spirits) and multiplayer (the latter being the reason why it wasn't released at the previously announced date of November 2010 - After PAX 2010, they took one of the comments of a player wondering about the possibility of multiplayer and added it in.)