It's Short, So It Sucks! 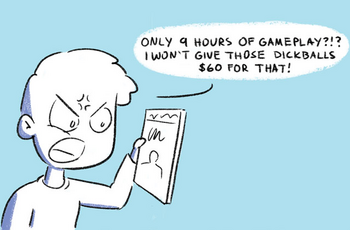 "Seven levels? Please, I did that almost in my sleep. It is difficult, but still beatable in a very short amount of time. And once you are done, there isn't a whole lot of incentive to play it again. Yes, you can change ships and weapons load outs, but the levels play exactly the same. So there's little to no replay value once you've beaten it."
— This

Games in the 1970s and early 1980s usually had no fixed ending; if you survived, you kept going. Then came home consoles and personal computers. Suddenly you had games with a definite length, lasting anywhere from 30 minutes to 2 hours. Sure, the ending probably wasn't much, but an arcade mentality still existed for most genres, meaning there was very little saving and a whole lot of soul-crushing difficulty. As such, unless you were very skilled, you probably aren't beating that game the same day — or in some case, the same weekend — you picked it up, meaning gamers were still more or less satisfied.

Fast-forward to the 1990s and 2000s, where more arcade-style genres began to take a backseat in popularity to adventure and role-playing games. Now games were expected to last dozens of hours, with hour-long games quickly becoming regarded as short, budget titles to be avoided at all costs. The mentality developed that a game's length must be directly proportional to its price, and it's a mindset that has only gotten stronger as we enter the present day. In other words, it's short, so it sucks: it doesn't matter what genre the game being targeted is: first person shooters, shoot 'em ups, RPGs, Action-Adventure, you name it. If you can beat the game in a day or two, or worse, in one sitting, expect review sites to, at best, cut off a whole point or letter grade.

Truth is, there is nothing (inherently) wrong with a short game. First of all, a game being short doesn't mean it's of poor quality. It literally just means that it's short. A shorter game of consistent, concentrated quality is ultimately going to be more preferable to games that were artificially stretched out with padding and other forms of fake longevity in response to this trope, but would otherwise be just as short.

Secondly, as gamers grow older and chose to continue the hobby, they find that adulthood has more time-consuming responsibilities and complications than childhood: college/university, work, family life, and paying for your own necessities of food, water and shelter leaves you with less time to play games, to say nothing of leaving you with less money to buy them. As such, there are a good amount of people who actually prefer a shorter game that can be beaten in a few days, or even hours, so they can get on with more urgent aspects of their lives, or at least move on to the next game (or the New Game Plus, or whatever post-game content is available in the present one).

Additionally, long games tend to satiate the player after a single playthrough, leading to the mentality of “oh, I'll put this game away or sell it.” In comparison, shorter, arcade-like games, due to being designed specifically around having high replay value, are less likely to do this. You may find yourself undergoing multiple playthroughs of such a game, with the total of those hours matching or even succeeding the time you may have spent with that year's big AAA action-adventure title. Games for handheld consoles and mobile phones also fall under this idea of "short is good", since they're designed to allow for quick intermittent play while you're out on a normal day in contrast to the longer play sessions you may have on PC or console. This is further mitigated by handheld games commonly being cheaper.

Still, as the general price of games remains high, gamers may blanch at paying full price for such a game, making this perhaps a legitimate complaint for a review, though a more apt label would be “it's short, so it's too expensive.” Some reviews have forgiven shorter games that are either budget-priced or cheap downloads (Portal is a commonly cited example, lasting around 3-4 hours, but originally sold in a $50 bundle with four other AAA games). Sufficiently egregious examples come across as a Mission-Pack Sequel masquerading as actual games.

Note that the minimum amount of time necessary to complete a game is never actually paid attention to, as very few games remain unbeatable within the space of a single day for the dedicated and experienced; it's only the amount of time it takes on an ordinary, first-time playthrough that draws this ire.

It's Easy, So It Sucks! is a sister trope. This is not the inverse of Bigger Is Better in Bed. It is the inverse of Ending Fatigue though, which is where you feel that the story has gone on for too long.

If people are screaming this because the work happened to be awesome for how little there was, and they're upset there wasn't more of them to enjoy, then you have yourself a case of Awesomeness Withdrawal.

This page is not about complaining about games that are too short. This is when the fandom (or hatedom) and reviewers make the complaint.