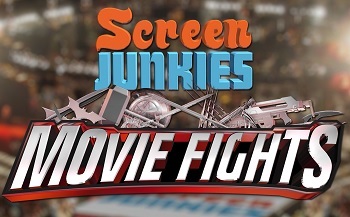 "This is like the Lincoln-Douglas debates with absolutely none of the importance."
— Dan Murrell
Advertisement:

Conceived as a response to fans' request for the channel to host a longer series, Movie Fights is a feature-length debate podcast/show which debuted in September 2014. It typically involves three "gladiators" discussing about various movie topics, such as trailers, casting decisions, etc., and having them fight for their opinions about it. The show's host would evaluate their arguments and creativity to pick a winning choice, and the contestant who has the most points by the end of the episode wins the game. A fact checker, introduced in episode 5 ("Does Interstellar Suck?") , would, as their role implies, research the details of the arguments to make sure they are factually accurate and that the contestants are not making things up as they go.

Due to the firing of the show's host, Andy Signore, after being accused on multiple accounts of sexual misconduct, Movie Fights was on hiatus until it's return on December 14th, 2017, with a format retooling and new set. As of the latest episode that streamed live on February 10th, 2020, the series has officially gone on indefinite hiatus, possibly as a result of Dan Murrell's departure from Screen Junkies, but also as a result of the COVID-19 pandemic not allowing the contestants to appear in the studio.

The series contains examples of the following tropes