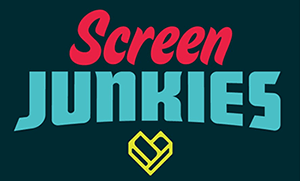 Screen Junkies is an internet show hosted on YouTube, focusing on, as their name tells you, film media and actors. It began in 2011 with a series of A-List celebrity interviews, then a video edit series called Super Cut debuted where relevant clips of different movies were mashed together to create something awesome such as "The Greatest Sports Pep Talk Ever." In 2012, the Screen Junkies Show proper premiered, hosted by Hal Rudnick. It's on a weekly schedule, with new episode premiering every Wednesday. The format typically involves getting a guest (often multiple ones) related to the movie topic of the week to give their opinions and commentary. They still achieve A-list interviews with people like Christopher Walken and Morgan Freeman. A recurring topic involves having comedian Nick Mundy come on to suggest how to "fix" a movie/franchise (by raging a lot about its current state and how it should stick to its roots) as a parody of fanboyism. Most episodes end with Hal asking fans to suggest something in the comments, the best reply receives a Screen Junkies T-shirt.

They're currently owned and operated by Wikia. Their Youtube channel is here