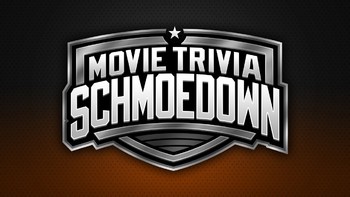 Let's get ready to Schmoedown!
"When you speak things into action, into the universe, things happen. If you commit, you focus and you fight, even when you’re down."
— John "The Outlaw" Rocha
Advertisement:

Warning: Unmarked spoilers for all previous matches below. Tropes related to live events or Patreon releases will not be added until/unless those matches are made publicly available on YouTube.

YouTube channel, previously airing on the Collider Videos channel. It features legitimate trivia competition, but also features WWE style storylines and characters. The show was founded by the Schmoes Know, Kristian Harloff and Mark Ellis. The competitors answer movie trivia questions from an array of randomly selected categories and receive points for correct responses. The competitor with the most points at the end of each match wins, sometimes mathematically eliminating their opponent prior to the final question or round. There are four leagues: Singles, Teams, Innergeekdom (which revolves exclusively around nerdy film franchises such as the Marvel Cinematic Universe, Harry Potter, and others), and Star Wars. Each division has a champion and rankings/tournaments to decide who will next challenge for the belt.

Storylines before and after matches mimic the storylines in 80's/90's professional wrestling, with characters defined as a Face, Heel, or Tweener. Characters would also sometimes align themselves with factions to heighten the drama and flesh out storylines. The outcomes of the matches dictate where characters go in these storylines.

Beginning in 2020 with Season 7, players participated in a draft at the beginning of the season where nine managers formed new factions that consisted of up to ten players with the option of trading them throughout the season. Each win would accumulate points for that player's faction with the winning faction obtaining a secret prize at the end of the season.

The current champions for each of the four divisions are (as of September 17, 2021):

The series contains examples of the following tropes that were written by hand or on a computer: