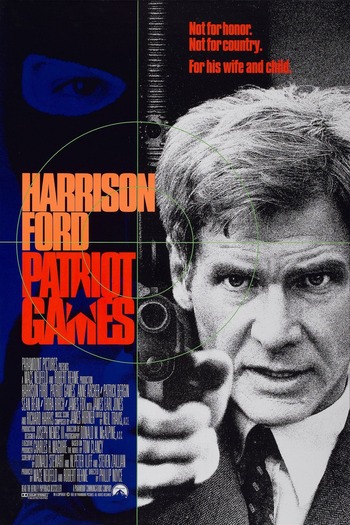 Harrison Ford is about to...well, you know.
Admiral Greer: Excuse me, Jack, tell me one thing in life that is absolutely for certain.
Jack Ryan: My daughter's love.
Advertisement:

Patriot Games is a 1992 film starring Harrison Ford, Sean Bean, Samuel L. Jackson, James Earl Jones, Ann Archer, and Richard Harris, adapted from the novel of the same name by Tom Clancy. The second film in the original Jack Ryan trilogy, it is the sequel to 1990's The Hunt for Red October and was followed by a third film, Clear and Present Danger, two years later. Notably, this installment recasts every major role from the first film (with the exception of James Earl Jones, who returns as Vice Admiral Greer), with the follow-up retaining these changes.

As in the novel, Ryan is on a working vacation in London, researching for an upcoming book of his when not playing "tourist" with his family, when he gets involved in The Troubles by interfering with an attack on the British royal family by an IRA splinter group, which then seeks revenge on him for the interference in the kidnapping of Lord Holmes, a member of the royal family.