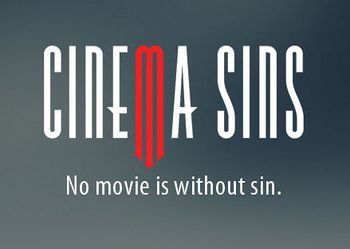 ROLL CREDITS! *ding!*
EVERYTHING WRONG WITH
TV Tropes
in one hour or less
Spoilers!
(duh..)
Advertisement:

is a web series created by Jeremy Scott and Chris Atkinson in 2012, dedicated entirely to pointing out the "sins" in movies. Sins include continuity errors, Critical Research Failures, anything that breaks Willing Suspension of Disbelief, editing mistakes, instances of "Dude, Not Funny!", instances of Idiot Ball or Idiot Plot, Plot Holes, Deus ex Machinas, Logical Fallacies, Continuity Lockouts, overused and misused tropes, or just anything the guys can make a snarky joke or reference to. Currently, there are seven shows playing on the channel (though all but the first appear to have been discontinued):

In 2014, a second channel was created, CinemaSins Jeremy

. Three series ran on this channel, in addition to Conversations with Myself (which was originally on the main channel):

Later in 2014, they started a third channel, Brand Sins

, with a different format,note Leaning toward social commentary a different host,note the first few by Jes Whitton, later installments by Bobby Burns and the same nitpicking. This channel was discontinued in early 2018.

Then in 2015, they made channel number 4, Music Video Sins

, which is just Cinema Sins with music videos. This channel was originally narrated by Jeremy as well until late February 2020, when writer Barrett Share took on the role.

In late March/early April 2015, they added a fifth channel to their lineup called Couch Tomato

. This channel was created and narrated by someone originally not affiliated with Sins Medianote The original parent company of CinemaSins. They have since branched away from the CinemaSins brand again, although both operate under CinemaSins' new parent company, Made In Network.; their videos are part of a series called 24 Reasons, which are film comparison videos with "twenty-four reasons why a newer film is similar to an older film" (or to put it another way, taking two movies with similar plots and wording the comparison to imply they have the exact same plot.

On September 6th, 2018, two things started: 1) They re-uploaded Captain America: The First Avenger, with an announcement at the beginning saying that over the years, certain videos disappeared for some reason or another. In previous years, September would be a half-hiatus, with one new sin video a week. They decided to start re-uploading the disappeared videos, with re-uploads making up the normally-new Thursday video, and adding them on Saturdays. After September was over, they went back to the Tuesday/Thursday new videos schedule, keeping Saturday for re-uploads until they were all caught up. The second thing that started was the TVSins

channel, with the first video being the Game of Thrones pilot. In May 2020, narration for these videos was taken over by writer Aaron Dicer.

Most recently, in 2021 the channel Commercial Sins

was created, which points out sins in TV commercials. This series is narrated by Chris.

The movies covered by Cinema Sins are on this page.

The channel itself can be accessed on YouTube here

. It also even has its own Wikipedia page.

For the much more optimistic parody channel, see Cinema Wins.

Tropes picked apart by the Everything Wrong With series: