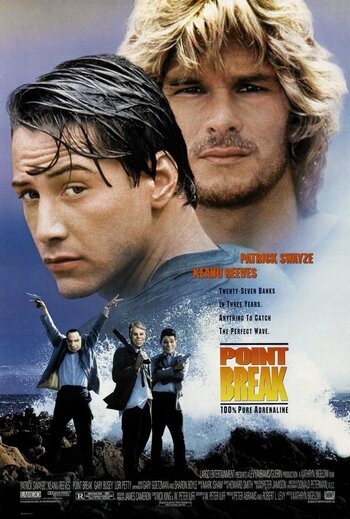 100% Pure Adrenaline.
"You trying to tell me the FBI's going to pay me to learn to surf?"
— Johnny Utah
Advertisement:

In this action/crime-drama, Reeves stars as Johnny Utah, an FBI agent whose background consists of having served as a quarterback for Ohio State. Johnny and his partner, Angelo Pappas (Busey), are assigned to investigate a string of bank robberies in the Los Angeles area being committed by a gang nicknamed the "Ex-Presidents", due to their use of masks of former U.S. Presidents during said robberies. Their investigation leads them to a group of surfers led by Bodhi (Swayze), an adrenaline junkie who would do anything for a cheap thrill... perhaps even rob banks.

Johnny falls fast for Bodhi's ex-girlfriend Tyler (Lori Petty), who he convinces to teach him how to surf. Johnny begins to suspect Bodhi of involvement with the robberies performed by the Ex-Presidents, but at the same time becomes addicted to his adrenaline-charged, thrill-seeking lifestyle. In the end he is so immersed in the extreme sports that he has a difficult choice to make: friends or duty?

The film was a box office success upon its release, and it has since gathered a cult following. The film also contains notable celebrity cameos including Red Hot Chili Peppers front man Anthony Kiedis. There is a stage adaptation, Point Break LIVE!, in which the role of Johnny Utah is cast from the audience moments before the show starts in order to maintain the "authenticity" of the role.

A remake was released in 2015, which stars Luke Bracey as Johnny Utah and Édgar Ramírez as Bodhi.