Film / War for the Planet of the Apes 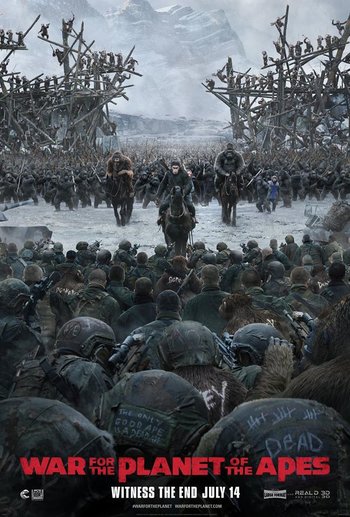 "I did not start this war. I offered you peace. I showed you mercy. But now you're here to finish us off for good."
"All of human history has led to this moment. The irony is we created you, and nature has been punishing us ever since. This is our last stand, and if we lose, it will be a planet of apes."
— Colonel McCullough
Advertisement:

Following the events of Dawn of the Planet of the Apes, Caesar and his ape colony are embroiled in a battle with an army of humans. When the apes suffer heavy losses, Caesar wrestles with his darker instincts as he resolves to avenge his kind. The battle puts Caesar against the humans' leader, Colonel McCullough, in an encounter that will determine the fate of their species and Earth's future.

A fourth film is in development from Wes Ball. Though initially reported as a reboot, Ball has confirmed that the movie will be a continuation of this series, focused on the story of Caesar's legacy.

War for the Planet of the Apes provides examples of: