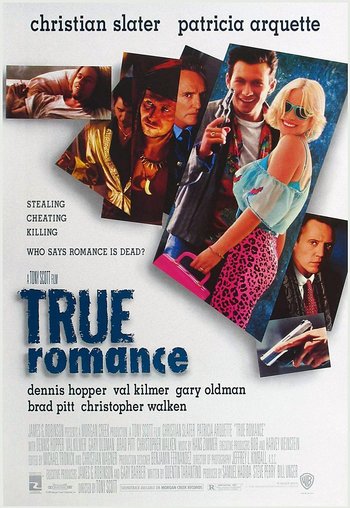 True Romance is a 1993 movie written by Quentin Tarantino (based on a script by Roger Avary) and directed by Tony Scott. It stars Christian Slater and Patricia Arquette, with a supporting cast that includes Dennis Hopper, Val Kilmer, Gary Oldman, Brad Pitt, Christopher Walken, and a then-relatively-unknown James Gandolfini.

It tells the story of outlaw lovers Clarence Worley (Slater) and Alabama Whitman (Arquette), who accidentally steal a suitcase full of cocaine and then go on the run from the mob. The couple make their way to Hollywood to sell the drugs — but it's there that the mob catches up with them.

The movie is notable, beyond its star-launching casting, for being the film that put Tarantino's writing on the Hollywood map. Additionally, it is fairly well-known (and well-liked) within the movie industry, given all the stars in it; but it isn't widely known, except among Tarantino fans.