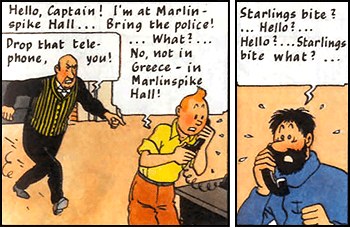 Roddy: I'm being attacked by a madwoman! She's got crayons!
Waiter: One chicken chow mein with... wonton?
Roddy: No, crayons!
— Flushed Away
Advertisement:

Two characters are having a phone conversation. We may be hearing one or both of them. Then, one of them says something, causing the other one to misunderstand, with hilarious results, and that's what this trope is.

There are two basic variations that are the most common, though other variations exist. The first one is when one character says something to themselves or another person, and the person on the other side of the phone thinks they're talking to them. This can be embarrassing, especially if what they said was profanity or an insult.

The other way this can be played out is if the second character simply misheard, perhaps due to mumbling or a bad connection. If that's the case, expect to hear something like "What?! No, no, I said X!".

Compare I Can't Hear You, Out-of-Context Eavesdropping, Mistaken for Prank Call, Poor Communication Kills, One Dialogue, Two Conversations, and Lost in Transmission. Also compare Embarrassing Ringtone, Funny Answering Machine, Prank Call, The Operators Must Be Crazy, Smell Phone, and Video Call Fail for other comical phone tropes. Can happen if the person on one side of the phone is using an Ear Trumpet or otherwise hard-of-hearing. Common when someone is Playing Cyrano, Landline Eavesdropping, or having an Earpiece Conversation.