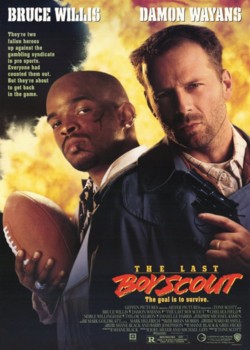 "And then some."
"This is The '90s. You don't just go around punching people. You have to say something cool first."
— Joe Hallenbeck
Advertisement:

The Last Boy Scout is a 1991 action film, directed by Tony Scott and written by Shane Black, starring Bruce Willis as a former Secret Service agent, now working as a private detective, and Damon Wayans as a retired professional football player. The two join forces to solve the murder of Wayans' character’s girlfriend (played by the then-obscure Halle Berry). The entire film consists of often violent action scenes and an endless parade of one-liners.