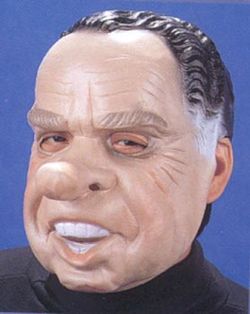 "I knew it was you all along, Richard Nixon!"
— Officer Barbrady, South Park
Advertisement:

As might be inferred by the title, a Nixon Mask is a rubber mask with the caricatured features of Richard Nixon, specifically a large nose and creepy wide grin.

Its status as the best-selling political mask of all time (and in many ways the inspiration for all political masks), as a symbol of famous counterculturists like Hunter S. Thompson and Bob Dylan, and as a hilarious remnant of the seventies have made it a classic go-to prop when a strange/hilarious mask is needed.