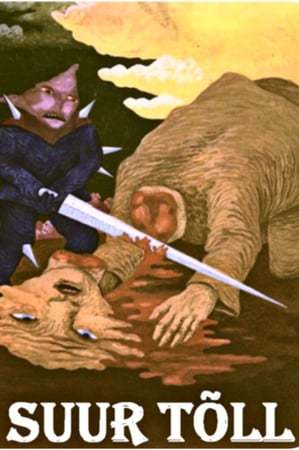 Suur Tõll (Translated as Tõll the Great) is a 1980 Soviet Estonian film, based on the Estonian myth of Tõll the Great, a giant king of Saaremaa. Tõll the Great lives a peaceful life, plowing fields until Vanatühi (the devil) fills his fields with stones. While resting at his home with his wife, some battered soldiers of the island come to him, telling him of the Danish invaders. Tõll then heads off to an island to retrieve cabbages, along the way saving a shipwrecked crew. After he and the soldiers drink his soup, he then heads off to the battle. The battle is going terribly, the mighty Danish hordes striking down every soldier. Tõll arrives, bringing soldiers on two giant wheels. However, the fresh soldiers are also struck down, driving Tõll into a rage, wiping out the Danish army by swinging his massive wheels.

Vanatühi, meanwhile, destroys Tõll's house, in the process killing his wife. Tõll, returning home after the battle, discovers his wife;s corpse, and proceeds to hunt down Vanatühi wielding a tree as a club. Tõll, unable to find Vanatühi, rests for a bit on a peninsula. Vanatühi then tries to break off the peninsula and shove it off to sea, only to clubbed by the awakened Tõll. Tõll then pursues him, driving him into the sea, where he drowns. He then buries his wife, grieving, and only roused by the news that Saaremaa is once more being invaded. This time wielding a whole cart, he goes once more into battle. Many Saaremaans die in the battle, and the hordes are so many that the cart begins to fall apart, its pieces flying everywhere. The hordes also have their own large leader, who wields a giant sword. While searching for a new weapon, Tõll's head is chopped off by the opposing giant. His body, headless, grasps the foe, crushing him and driving off the horde. As his body and head turn to wood, Tõll declares he will awaken when the land is filled with war once more.

Can be watched here.

This animation provides examples of the following: