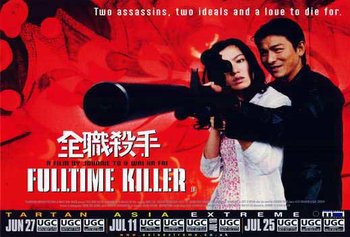 Fulltime Killer is a 2001 Hong Kong action film directed by Johnnie To, starring Andy Lau, Takashi Sorimachi, Kelly Lin, and Simon Yam. It's a strange action-comedy that plays around with flashbacks and points of view, and almost requires multiple viewings to truly understand.

O is considered the greatest hitman in Asia. Outside of the job, he lives a reclusive existence in an apartment in Hong Kong.

Lok is an eccentric, flamboyant assassin who wants to discover O's identity and claim the top title for himself.

Chin answers an ad on a bulletin board and accepts a job as the cleaner for O's flat. Lok soon insinuates himself into her life in what's half a courtship, half an attempt to figure out who O is and how best to kill him. It turns into a bizarre love triangle between Chin, O, and Lok, with none of the three quite sure of the others' motivations.

Finally, there's Albert Lee, an Interpol detective who's out to arrest both O and Lok, and who ends up writing a book about the case.

Tropes found in this Film include: