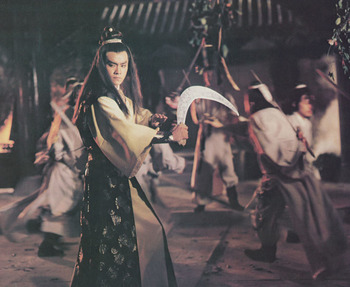 A weapon is only as good as it's wielder.

Derek Yee plays Ding Peng, a young swordsman making a big name for himself in the world of martial arts. But after being tricked by a scantily-clad woman who turns out to be working for a ruthless martial arts clan, and humiliated by his arch-rival Master Liu, Ding Peng is ultimately driven to kill himself in the mysterious, fog-shrouded forest where no-one who enters may emerge again. But his plans for taking his own life is interrupted, when Ding Peng meets and falls for Qing Qing, a lady who lives in the woods, who decides to help Ding Peng avenge his defeat. In order to be the best in the martial arts world, again, Ding Peng must find the fabled Full Moon Scimitar and train himself to use it.