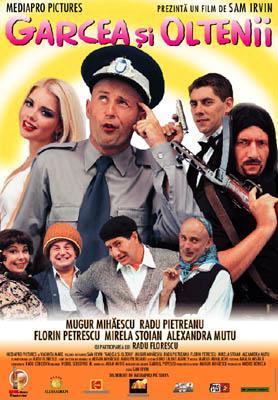 Garcea și Oltenii ("Garcea and the Oltenians") is a 2001 Romanian comedy directed by Sam Irvin. The movie features the Vacanța Mare Group and it combines two of their most famous sketches: "Garcea", about the titular dumb, aggressive, and incompetent cop, and "Leana and Costel", about the titular peasant couple who live in the village of Sadova with their Dysfunctional Family.

The plot concerns a magical stone that was created by by seven fictional Dacian tribes; it was stolen by the Romans, but the rider carrying it is shot by an arrow, and the stone falls into a swamp. Two thousand years later, Axinte and Lila are sent by their mother Leana to get some water to cook a rooster that their father Costel stole from their neighbor Mitică. While at the pond, they discover the lost stone and take it with them. However, American satellites have discovered the stone as well. A scientist sends the news to his friends from other countries, including Germany, Italy, and Japan, and they all head to Sadova.

Unfortunately, Russian terrorist Ival Ivalowsky has also found out about the stone. The Americans send their best agent, David Blonde, to retrieve the stone and annihilate Ival. Meanwhile, Garcea is also sent to Sadova to investigate a case of fraud after one of Axinte's failed wishes, all while the villagers observe the visiting foreigners, using their arrival as an opportunity to take their money. Hilarity Ensues.