Film / Get Over It 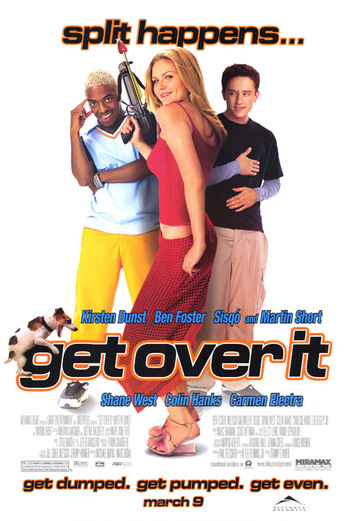 A 2001 teen comedy directed by Tommy O'Haver, starring Ben Foster and Kirsten Dunst. Like 10 Things I Hate About You and She's the Man, it is a loose High School adaptation of a Shakespearean play— in this case, A Midsummer Night's Dream.

Berke Landers (Foster) has been dating his high school sweetheart Allison (Melissa Sagemiller) for years—until the day she dumps him for the vaguely-British ex-boy band member Striker (Shane West). Allison and Striker sign up for the upcoming school play, a musical adaptation of A Midsummer Night's Dream, and in an attempt to win back his beloved, Berke does too. Unlike Allison and Striker, Berke has no acting, singing, or dancing talent, and so enlists the help of his best friend's little sister, Kelly (Dunst), to teach him the ways of drama. As his rivalry with Striker grows, Berke finds himself growing closer to Kelly... and to add to his troubles, one of the leads breaks his leg, landing Berke with a leading role!

Meanwhile, Berke and his friends find themselves in many American Pie-esque situations. Hilarity Ensues!

While hardly the best of the teen-Shakespeare movies of the 2000s, Get Over It has an odd charm to it, due in part to its wacky and sometimes surreal humour (rather fitting, considering the source material). Arguably the best part is "A Midsummer Night's Rockin' Eve", the rock musical version of AMSND they dreamt up for the movie.