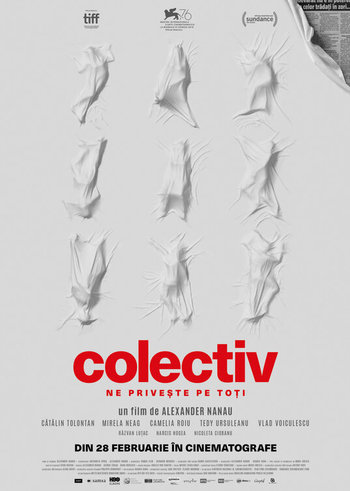 Collective is a 2019 film from Romania directed by Alexander Nanau.

It is a documentary about the 2015 Colectiv nightclub fire

in Bucharest, and the diluted disinfectants scandal

that erupted afterwards. On October 30, 2015, as a metalcore band called "Goodnight to Gravity" played at the Colectiv nightclub, pyrotechnics from the band's show started a fire. The fire quickly spiraled out of control, leading to a mad scramble for the only exit, the front door. 27 people were killed from fire, smoke inhalation, or being trampled to death.

But the deaths did not stop there. In the days and weeks following the fire, an additional 37 people died in hospitals, more than died in the actual fire. This wave of hospital fatalities is investigated by Sports Gazette, a Romanian newspaper. (The film does not stop to explain why a sports magazine started doing hard-hitting investigative reporting about a fire.) The Gazette soon uncovers shocking information about the state of Romanian hospitals. The investigation reveals that disinfectants sold by a Romanian pharmaceutical firm are routinely diluted to as little as 10% of their recommended strength, rendering them largely useless. As a consequence bacterial infections rage unchecked, killing the vulnerable burn victims.

The Romanian government is toppled by the mass public outrage. A new Minister of Health, one Vlad Voiculescu, hopes to root out the corruption that plagues Romanian health care, but things keep getting worse and worse.