Film / She Hate Me 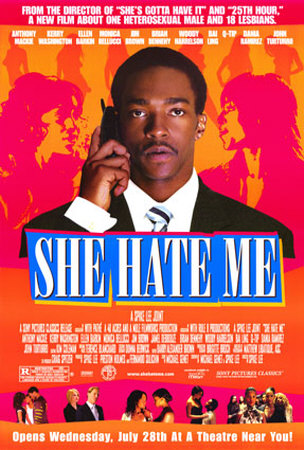 All Lesbians Want Kids: The Movie.
"When I think of Enron, I don't think of Ellen."
— Anonymous IMDB poster
Advertisement:

She Hate Me is a 2004 comedy-drama film directed by Spike Lee.

John Henry "Jack" Armstrong (Anthony Mackie) is a Harvard graduate and a financially successful, upwardly mobile executive at a biotechnology firm. After a colleague commits suicide, Armstrong uncovers corrupt business practices and attempts to blow the whistle. He's promptly fired on false grounds of security fraud, and his assets are frozen. Things are looking bleak, when all of a sudden his ex-fiancée Fatima Goodrich (Kerry Washington), who came out as a lesbian and broke up with him four years ago, turns up at his door. She and her girlfriend Alex Guerrero (Dania Ramirez) offer him a proposition: they want babies, and they're willing to offer him $10,000 dollars to impregnate them both. After he reluctantly (oh, come on) agrees, Fatima brings him friends of hers, all of whom likewise want kids and are willing to pay him $10,000 to impregnate them. He acts as though it's hell (give us a break...). Meanwhile, he pushes for his whisteblowing to be taken seriously.