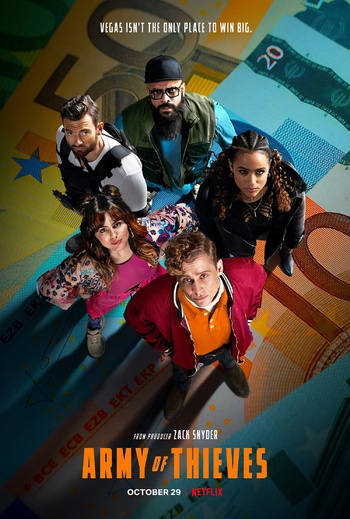 "This is about becoming legends."
Gwendoline: The world's distracted. This window of opportunity isn't just our only chance. It's yours.
Dieter: My only chance... for what?
Gwendoline: A life less ordinary.
Advertisement:

Army of Thieves is a 2021 German-American heist-romantic comedy film directed by and starring Matthias Schweighöfer, produced by Zack Snyder, Deborah Snyder and Wesley Coller, and written by Shay Hatten, to be released on Netflix. It is a prequel to Snyder's Army of the Dead, which was released earlier in 2021. Hans Zimmer composed the soundtrack.

The story takes place across Europe six years before the events of Army of the Dead, during the beginning stages of the Las Vegas zombie outbreak. It follows German safecracker Ludwig Dieter (Schweighöfer), real name Sebastian Schlencht-Wöhnert, in his early days in that criminal field as he is hired by the mysterious thief known as Gwendoline Starr to pull off a series of heists with the help of a misfit crew of accomplished thieves. The targets that will put Dieter's skills to the test are three nigh-unopenable safes conceived by legendary locksmith Hans Wagner. All three are named after operas from Richard Wagner's The Ring of the Nibelung.

Army of Thieves contains examples of: