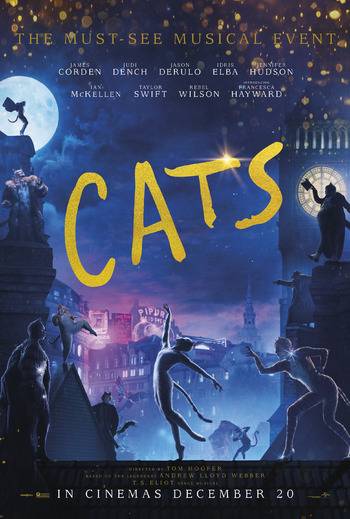 "Come. We're about to begin."
Victoria: The Heaviside Layer?
Munkustrap: Far, far up in the sky, from where the most deserving cat will be reborn into another life.
Mr. Mistoffelees: So they can be who they've always dreamed of being.
Advertisement:

When a young kitten named Victoria is abandoned on the streets of London, she suddenly finds herself being taken in by a mysterious tribe of street cats called "the Jellicle Cats". They invite her to their domain just in time for the yearly ceremony where a lucky cat is chosen by the tribe matriarch, Old Deuteronomy, to ascend to the skies and reach the Heaviside Layer, where they will be reborn as a new cat with a "different Jellicle life". Over the course of her stay, she meets several of the night's worthy candidates, along with a shy magician named Mr. Mistoffelees, a notorious criminal named Macavity, and a lonely, worn out glamour cat by the name of Grizabella.

It is distributed by Universal, and was released on December 20, 2019.

♫ Touch me, it's so easy to leave me
All alone with the memory
Of my days in the sun
If you touch me
You'll understand what happiness is
Look, a new day has begun! ♫