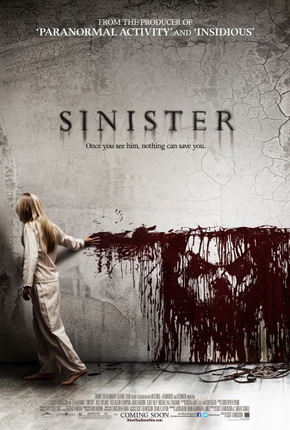 That's a lovely painting.
Once you see him, nothing can save you.
— Tagline
Advertisement:

Sinister is a horror film directed by Scott Derrickson and written by C. Robert Cargillnote of Spill and Ain't It Cool News fame, inspired by a nightmare Cargill had after first watching The Ring. It premiered at SXSW 2012 before getting a wide release in October of that year.

The film stars Ethan Hawke as Ellison Oswalt, a True Crime writer who is desperate to write a new hit. In order to do so, he moves his family into a house where a grisly murder took place so that he can write a book solving the case. When he stumbles across a collection of home movies in the attic, he finds that there is more to the case than he thought...

A sequel titled Sinister II was released in August 2015, written by Cargill and Derrickson and directed by Ciaran Foy. James Ransone reprises his role from the first film, now as the lead, investigating the murders in an attempt to prevent any more killings. Meanwhile, a young mother (Shannyn Sossamon) and her twin sons have moved into a haunted house...

The first film contains examples of:

The second film contains examples of: