Film / The Sinners of Hell 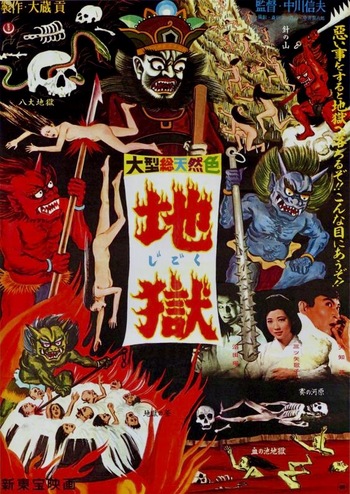 Jigoku (地獄), also known as The Sinners of Hell, is a 1960 Japanese horror film directed by Nobuo Nakagawa and starring Utako Mitsuya and Shigeru Amachi. It bears the distinction of being one of the first real "gorefest" movies, even preceding 1963's Blood Feast, as well as being one of the most graphic depictions of the horrors of the Buddhist Hell put to film.

Shirō (Shigeru Amachi) is a mild-mannered theology student. He is engaged to be married to Yukiko (Utako Mitsuya), the daughter of one of his teachers, Prof. Yajima. Shirō has poor taste in friends, unfortunately, hanging out with a creepy and rather unsettling fellow student named Tamura. One night when they've been out drinking, and with Tamura behind the wheel of the car, they strike and kill a gang leader named Kyōichi.

Tamura casually drives away, leaving Kyoichi to die in the street, much to Shirō's horror. Tamura believes they weren't seen, but Kyoichi's mother did see them, and she plots revenge. Meanwhile, tragedy strikes, with Yukiko killed in a car wreck while accompanying Shirō to the police station. A grief-stricken Shirō gets more bad news when he's told that his mother Ito is dying. He goes to visit her at the old folks' home that his parents operate, and while there he meets the various sleazy and criminal residents of the dilapidated retirement home. The one non-disgusting person he meets at the home is Sachiko, who is the spitting image of Yukiko (and also played by Utako Mitsuya) the daughter of a disgraced painter who is painting a portrait of Hell.

Kyōichi's mother and his girlfriend track Shirō down to the retirement home and attempt to avenge themselves. Tamura shows up at the home uninvited. Soon, everything goes pear-shaped as Shirō, Sachiko, Tamura, Kyōichi's mother, Kyōichi's girlfriend, and everyone at a party all wind up dead.

And then, everything goes straight to Hell.

The final third of the film takes place in the Buddhist Hell, where Shirō learns horrifying truths about the people in his life while witnessing the myriad horrors that his acquaintances have earned for their sins, all while trying to save the daughter that he learns that he had with Yukiko shortly before her death.