Film / Deliver Us from Evil 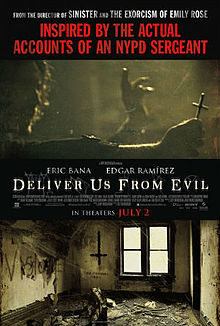 Deliver Us From Evil is a 2014 horror film based on the actual cases of former NYPD sergeant Ralph Sarchie directed by Scott Derrickson and starring Eric Bana, Èdgar Ramirez, Olivia Munn, Joel McHale, and Sean Harris. It centers around his dealings with several seemingly unrelated cases, but he soon learns that they are all share one common cause: demonic possession.