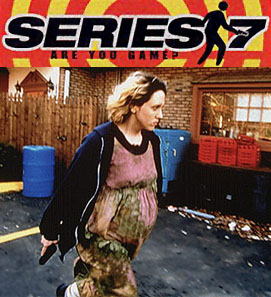 The 2001 film Series 7: The Contenders, written and directed by Daniel Minahan, is a dark and violent satire of American Reality Shows.

The Contenders offers a unique form of entertainment for its loyal viewers: the show's contestants must kill each other until only one "Contender" remains standing. The contestants have no choice as to whether they want to compete; the moment a contestant is notified that they've become a Contender, any other Contender can kill them without legal repercussions. Adding insult to injury is the fact that winning the show once doesn't get a Contender anything but a longer lease on life; a full release from the show only happens when a Contender wins the "contest" three times in a row (as the winner remains a Contender until either death or the third victory). In the show's seventh season (or "series" in British terminology), two-time champion Dawn Lagarto hopes to gain her freedom; to do so, she must outlive five other Contenders — one of which, the terminally-ill Jeffrey Norman, happens to have had a prior romantic relationship with Dawn.