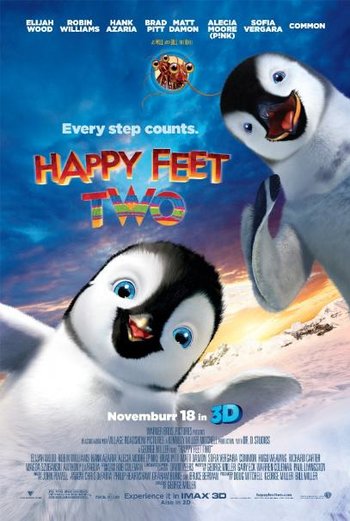 Happy Feet Two is the 2011 sequel to Happy Feet. It was directed by George Miller, with the screenplay by Miller, Gary Eck, Warren Coleman and Paul Livingston.
Advertisement:

The movie centers on Mumble's son Erik, who is going through an identity crisis similar to the one his father had, and their attempt to save the colony from a giant iceberg that has blocked their way to the ocean. Erik encounters the Mighty Sven, a "penguin" who can fly! Things get worse for Mumble when the world is shaken by powerful forces, causing him to brings together the penguin nations and their allies to set things right. A subplot follows the adventures of two krill, Will and Bill, who stray from their swarm and head off to find their destiny. An official trailer (showcasing the same type of Parental Bonus songs as its predecessor) can be seen here