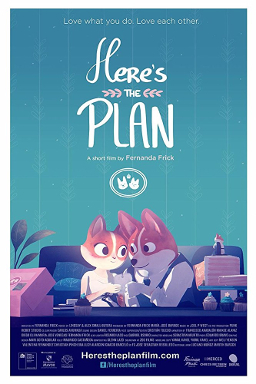 ("Este es el Plan") is a 18-minute, 2017 Chilean computer-animated romantic drama Short Film. Directed by Fernanda Frick and financed by the National Council of Culture and Arts, it took almost 2 years of work and a talented team of 32 professionals to finish it. The film received multiple awards, including "Best Chilean Short Film" (Chilemonos 2017), "Best Short Film for Youths" (Fan Chile 2017), and "Best Short Film for Children" (FICV 2017), and an Honorable Mention for "Animated Short Category" (Shorts Mexico 2017). The film is now freely available to watch online.

A married cat-dog couple of cupcake bakers dream of opening their own bakery. One day their oven breaks and they have to postpone their dream in order to earn money and replace it. However, the more things change from their initial plans, the more the two start drifting apart.