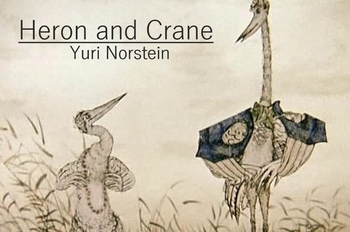 Will you marry me?
Advertisement:

The Heron and the Crane is a 10 minute 1974 Russian animated film directed by Yuriy Norstein, produced by the Soyuzmultfilm studio in Moscow. Based on a folk tale, it tells the bittersweet story of a Crane and a Heron who live in the ruins of a mansion.

Crane decides to court Heron, who initially rejects him because of his arrogance. By the time Heron has changed her mind and is willing to marry Crane, it's his turn to refuse her. After a while however, he reconsiders and asks Heron to marry him again, only to have her pride get in the way of accepting. It is a delicate courtship ritual, a hopeless cause thwarted by either party's inability to overcome their own conceit, even if the cost is their lifelong happiness.

The ending implies that the tragic back-and forth of marriage proposals and pride continues forever as the characters make increasingly anguished gestures of love to each other.