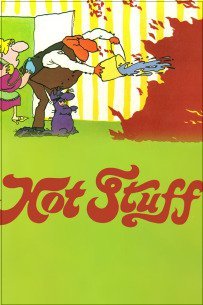 "But although fire is imprisoned, and can be put to work by flicking a switch, it still can't be trusted, and is constantly waiting for a chance to escape".

Hot Stuff is 1971 Animated Short directed by Zlatko Grgic and written by Don Arioli. Produced by the National Film Board of Canada on the behalf of the Dominion Fire Commission to promote fire safety, the nine minute short tells the history of fire: how it was discovered by man and how its uses were explored, as well as shows the catastrophic consequences for being careless with it.

The film garnered seven international awards, including Best Educational Film Award at the World Festival of Animated Films in Croatia and a Canadian Film Award for Arioli for best non-feature screenplay.