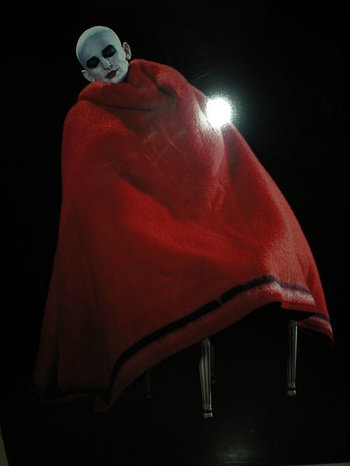 Harpya is a 1979 animated short film (8 1/2 minutes) from Belgium, written and directed by Raoul Servais.

A man walking down a street in a vaguely Belle Époque, turn-of-the-20th century European setting, hears a woman's screams. He dashes to the sound, and finds the man is drowning a woman in a fountain in the square. The man clubs the assailant over the head with a bottle, thus saving the woman...only to discover that she isn't a woman. Instead she is a harpy

The man takes the harpy home as a pet, which soon proves to be a mistake. He begins to starve, as the ravenously hungry harpy pounces and eats literally all the man's food. It also eats the man's parakeet. When the man tries to leave the house, the harpy intercepts him at the front door and eats both of his legs. Finally, the man puts a phonograph record on to distract the harpy, and makes a final dash for freedom.