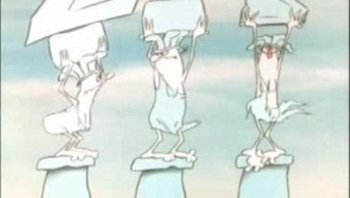 A Greek Tragedy (Een Griekse tragedie in Dutch) is a 1985 animated short film from Belgium, written and directed by Nicole van Goethem.

hold up the ceiling to an ancient Greek temple. They manage to hold it up over centuries of wind and rain, but when construction workers show up, the temple finally collapses. Instead of being disappointed, however, the caryatids find this liberating, dancing away with glee.