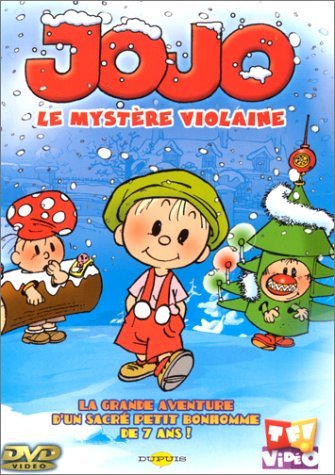 Jojo: The Violet Mystery (French: Jojo: Le Mystère Violaine) is a 52 minute long Belgian-French Christmas Special that premiered in 2000. It is based on André Geerts' Belgian Comics series Jojo, about the titular green-capped boy living with his Granny, and his best friend Fat Louis (referred as Chubby within the film) who lives with his baker father Mr. Cupcake.
Advertisement:

In this capricious tale of friendship, Jojo and Fat Louis meet a new classmate, a big-nosed girl named Violet Snout, as the school year begins. While the boys and the other classmates initially mock her for her nose, she unusually becomes a popular student to Jojo's surprise. But once the principal catches Violet for a scheme that helped her befriend the other classmates, not to mention Violet's mother hospitalized, the girl disappears from school. Jojo and Fat Louis set out to find her on the snowy night of Christmas Eve.

Its English dub can be found as an audio track on some DVD releases.