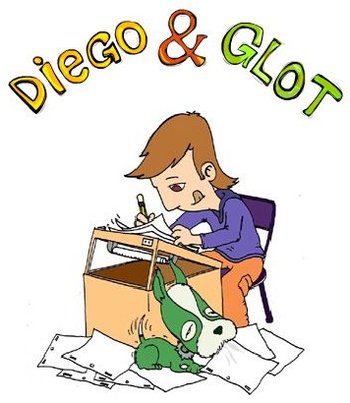 Diego and Glot is a Chilean animated series created in 2005 by CuboNegro Studios and Canal 13. This is the first hand-drawn animation TV series made in Chile since the Condorito shorts in The '80s. The series got two seasons (Season 2 releasing in 2009), the first of which is the most remembered and beloved by fans. Diego y Glot is known as one of the most beloved Chilean animated series along with Los Pulentos that was also aired the same year (and on the same channel) as this one. In 2005, The Movie was announced and to be released in 2007, but eventually entered into Development Hell. The series was aired in Latin America by Disney XD in 2017 and in May 2020 received a comeback in Chile thanks to the new children's public TV channel TV Educa Chile.

The story is about the Plá Perez, a middle-class family and their daily life problems and adventures. The story centers on Diego Plá and his green mutt Glot and the adventures with his friends Droguett, Danilo and Violeta, all of them classmates going to the same school.

The main site is offline, but there's an English article

in The Other Wiki. Also, the complete season 1

The series provided examples of: