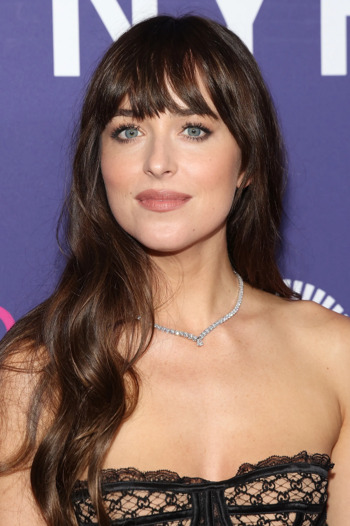 Dakota Mayi Johnson (born October 4, 1989 in Austin, Texas) is an American actor and model best known for her performance as Anastasia Steele in the film Fifty Shades of Grey.

She was born to actors Don Johnson, of Miami Vice fame, and Melanie Griffith (making her Tippi Hedren's granddaughter), and Antonio Banderas is her former stepfather. Dakota's debut as an actor was in the first movie Banderas directed, the 1999 dramedy Crazy in Alabama starring Griffith. She played the role of one of Griffith's character's daughters.

After finishing her studies she returned to acting in David Fincher's 2010 film about the origins of Facebook The Social Network starring opposite Justin Timberlake as Amelia the first date we see when his character is introduced. Following this, she had prominent roles in Beastly, 21 Jump Street, The Five-Year Engagement, Need for Speed and Ben and Kate (her first television work).

Not to be confused with Dakota Fanning.