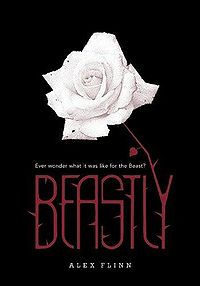 And white is for true love...
Advertisement:

Beastly is a 2007 young adult novel written by Alex Flinn. It is a modern retelling of Beauty and the Beast from the perspective of the beast, set in New York City.

Kyle Kingsbury is as rich, handsome and popular as he is selfish, shallow and cruel. After he plays a mean practical joke on an outcast girl in his class, who turns out to be a witch named Kendra in disguise, she casts a spell on him, transforming him into a beast. However, because Kyle gave an unwanted rose corsage to a girl working a ticket booth — a small act of kindness he performed shortly before his transformation — Kendra allows him exactly two years to break the spell before he is doomed to remain a beast forever. To do this, Kyle must fall in love with a girl and she must love him in return, proving the love with a kiss.

While Kendra later offers Kyle further aid by giving him a Magic Mirror that shows him whomever he wishes to see, he finds great opposition in his shallow, image-obsessed news reporter father, who refuses to associate with his beast form. However, a chance encounter with a robber's daughter named Linda could be just what he needs to break his curse.

A film adaptation of the book was released on March 18th, 2011, starring Alex Pettyfer as Kyle, Vanessa Hudgens as Lindy (the film's equivalent of Linda), and Mary-Kate Olsen as Kendra. In the adaptation, instead of Kyle being turned into an inhuman beast, he turns into a "human monster" — a huge, ugly punk covered in tattoos, piercings, and scars.

The Film of the Book provides examples of:

The later books provides examples of: