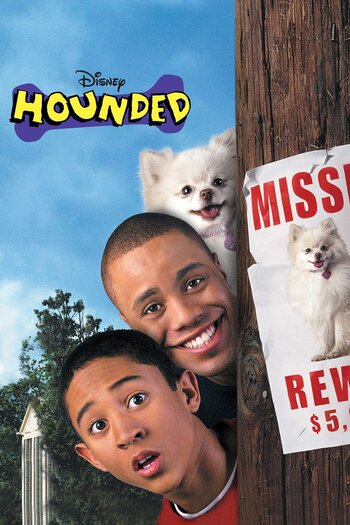 Taking care of this dog is no walk in the park!
Advertisement:

Hounded is a 2001 Disney Channel Original Movie starring Tahj Mowry as Jay Martin, a student attending a private middle school who seeks to obtain a scholarship to a prestigious school, but accidentally kidnaps his corrupt principal's (Ed Begley Jr.) show dog while trying to prove that he helped his lazy son (Shia LaBeouf) cheat to obtain said scholarship, forcing him and his older brother, Mike (Craig Kirkwood) to work together to bring the dog home.

13-year-old Jay Martin (Mowry), a student at Columbus Hall, is competing for a scholarship to the prestigious Donald Peterson Academy so he can study art, with his main competitor being Ronny Van Dusen (LaBeouf), the lazy son of the school's corrupt headmaster, Ward Van Dusen (Begley). With the scholarship being the only one of its kind available, if Jay doesn't obtain it, he will be sent to the all-boys Starkwell Military Academy his older brother, Mike (Kirkwood), attends upstate, where their deceased father had been a former student and teacher. Jay has prepared a presentation that he hopes would help him obtain the scholarship, but his dreams to attend Peterson just might be all for nothing when Ward confiscates his presentation for a petty reason, and then Ronny copies it word-for-word and obtains the scholarship. When Jay brings this up with him, Ward expresses intention to look into it, only for Jay to overhear him telling Ronny to remove any and all evidence that he cheated to protect the family name and reputation.

While the Van Dusens are at the award ceremony, Jay breaks into the pool house of their mansion— which Ronny uses as his bedroom— to steal back his presentation and prove to the judges Ward helped Ronny cheat, but it quickly goes south when Camille, the prized show dog belonging to Ward's wife, Eliza (Rachelle Carson), discovers him and follows him home, and then wreaks havoc in the Martin household when she goes too long without her anti-anxiety medication. Soon enough, when Mike comes home from Starkwell to check on Jay while the boys' mother is out of town taking care of their injured aunt, he becomes involved and in spite of their ongoing rivalry, the two brothers have to work together to get Camille home and give the Van Dusens their just desserts for their corruption.