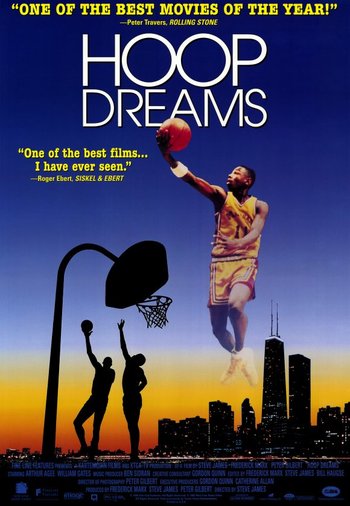 Hoop Dreams is a 1994 documentary directed by Steve James telling the story of William Gates and Arthur Agee, two young African-American children growing up in the Cabrini-Green housing projects of Chicago.

At the beginning of the movie, a talent scout for an elite private school, St. Joseph out in Westchester, spots Gates and Agee playing on the basketball courts of Cabrini-Green. Gates and Agee, then 8th graders, both live in poverty and both have dreams of becoming NBA stars as a means of escape from the projects.

The film, which was shot over a period of five years, follows William and Arthur throughout high school and documents their life struggles. Both families are mired in poverty (at one point the power is turned out at Arthur's house). Both struggle to pay tuition at St. Joseph—a problem that has very different outcomes for the two kids. William winds up a father when he impregnates his girlfriend Catherine, while Arthur's father Bo abandons the family after developing a serious cocaine problem.

Hoop Dreams was at the center of one of the most famous Award Snubs in Oscar history. Despite being hailed as an instant classic, it was not even nominated for the Oscar for Best Documentary Feature. The ensuing uproar led to a revision of the nominating process in which actual documentarians voted on the nominees.

In Real Life, neither Gates nor Agee played in the NBA, and tragedy struck their personal lives, as Arthur's father Bo and William's brother Curtis, both seen in this film, were each later murdered. However, both did all right by themselves. Gates married his high school sweetheart Catherine (shown in the movie), had three more children, and became a Protestant minister. Agee has worked as a motivational speaker and run basketball camps.