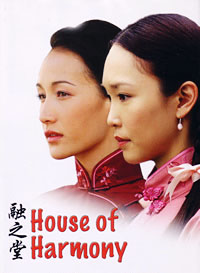 House of Harmony is a made-for-TV movie based on a novel by Barbara Wood and first broadcast in 2005. It tells the story of two Singaporean Chinese women, one the other's daughter, who fall in love with two American businessmen, one the other's adopted son.

The first part takes place in the 1920s and focuses on the relationship between Chen Meiling (Fann Wong) and Richard Barclay. Richard is a visiting American businessman in Singapore who is injured during a mugging, and is rescued by Meiling, the daughter of a local doctor. Although betrothed to the son of a fellow Chinese family, Meiling falls in love with Richard, and the two enter a secret relationship, out of which a daughter is born.

The second part takes place some 20 years later and focuses on the now-grown daughter, Harmony (Maggie Q). She moves to Los Angeles in the hope of starting a pharmaceutical company and incidentally finding her father. She finds out he died on his way back from Singapore, but has an adopted son whom she, in turn, falls in love with.