Film / I Not Stupid 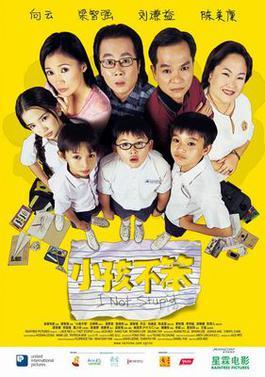 I Not Stupid is a satirical film directed by Jack Neo (who also played a role) that premiered in 2002 and touches upon several aspects of Singaporean society, primarily "streaming" in the education system and its impact on both the unfortunate children and their families.

The story follows three children in Primary 6 [sixth grade]: Terry Khoo, Liu Kok Pin and Ang Boon Hock, who have been placed in the EM3 stream. Because EM3 is seen, perhaps rightly, as a dumping ground for the lowest academic performers, the three are constantly belittled by their peers and by society in general. From the very beginning, the film shows the consequences of being placed in EM3. Their word is not as good as that of their classmates or their classmates' parents. Their home lives suffer as their parents become frustrated by their inability to help their children. One teacher after another gives up on the so-called "lost cause" students.

Although academic streaming is a major element of the movie, it is also used as a vehicle to touch upon other general social issues, such as excessive deference to authority and the fundamental breakdown in communication between parents and children. I Not Stupid became the third-highest grossing film in Singapore, behind two of Jack Neo's other films: Money No Enough and the sequel, I Not Stupid Too. It was eventually adapted into a TV series that expanded on some of the issues covered in the original, though Jack Neo played a smaller role in its production.