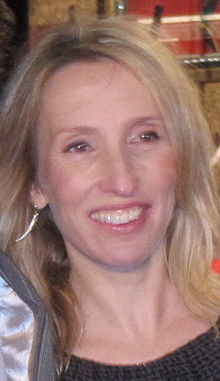 Samantha Louise Taylor-Johnson OBE (née Taylor-Wood, born March 4, 1967) is an English artist, director, and photographer, and one of the "Young British Artists".

In 2002, she made a portrait of a sleeping David Beckham, which she followed up with "Crying Men" depicting leading actors such as Robin Williams, Sean Penn, and Paul Newman, well, crying. She directed the 2009 film Nowhere Boy starring Aaron Johnson as a young John Lennon, and later she and Johnson married. They have two daughters together. She also has two daughters from a previous marriage with Jay Jopling.

She directed the 2015 film adaptation of the best-selling novel Fifty Shades of Grey.

Note: She also sang the female lines on the Pet Shop Boys cover of "Je t'aime...moi non plus."