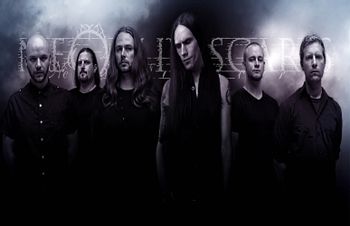 Ne Obliviscaris are a mostly Australian Progressive Metal band (lead guitarist Benjamin Baret is French, and current bassist Martino Garattoni is Italian) who incorporate elements of Melodic Death Metal, Black Metal, Thrash Metal, Classical Music, Avant-Garde Music, Jazz, and flamenco. They are unusual in the crowded field of progressive metal for the prominently featured violin virtuosity of Tim Charles. However, all of the musicians in the band are quite capable (Daniel Presland has even won an award for his drumming prowess) and their music never fails to be compositionally interesting as well. Ne Obliviscaris have garnered quite a lot of critical acclaim for their releases thus far.

Here where colours collide! This black hole ignites! My trope in bloom!: