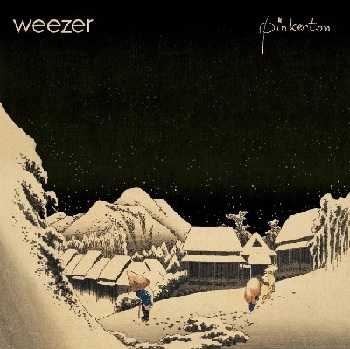 Goddamn, you half-Japanese girls
Do it to me everytime...
"Much like Hamlet is a young man’s play, I feel that Pinkerton is something of a young man’s album."
— Teenage Victory Songs, "Why Bother?"

Pinkerton is the second album by Alternative Rock band Weezer, released in 1996. The album was initially planned as a Rock Opera named Songs from the Black Hole, but the concept was eventually abandoned, and the final album combined songs that were discarded from Black Hole and new, Creator Breakdown-y material. The title of the album comes from the character in Madame Butterfly; the Pinkerton security agency sued for trademark infringement right before its release, only to have their case thrown out almost instantly.

As mentioned above, frontman Rivers Cuomo's initial plan to follow their self-titled debut Weezer (The Blue Album) was to create an ambitious album that he described as "an analogy for taking off, going out on the road and up the charts with a rock band, which is what was happening to me at the time I was writing this and feeling like I was lost in space". The songs were also influenced by Cuomo's mental state, as he had undergone painful surgery to correct one of his legs being shorter than the other since birth, and was accepted to study at Harvard with a letter describing his disillusionment with the rock lifestyle but only found himself more isolated and lonely.

The album was recorded between late 1995 and mid-1996 at a variety of studiosnote Sound City and Hollywood Sound Recorders in Los Angeles, Fort Apache in Boston, Rumbo Recorders in Canoga Park and Electric Lady Studios in New York during Cuomo's breaks from Harvard, which left the other band members plenty of free time to indulge in their own projects.

Intending a rawer, Darker and Edgier sound, Cuomo chose to have the band self-produce the record with 12 engineers, replacing Ric Ocasek's earlier radio-friendly production with a pounding drum sound and vicious, aggressive guitar sounds accomplished by connecting them to multiple distortion pedals at once. Cuomo, bassist Matt Sharp and guitarist Brian Bell also eschewed overdubbing vocals like on their previous album, choosing instead to record them live around three microphones.

The first single, "El Scorcho", stiffed on MTV, possibly due to Cuomo's refusal to indulge in the "gimmicky" Spike Jonze-esque videos that made "Buddy Holly" a success, and despite subsequent singles "The Good Life" and "Pink Triangle", Pinkerton stalled at #19 on the Billboard charts. The additional mixed critical response the album received embarrassed Cuomo, drove Weezer into a hiatus for three years, and influenced the band's more traditional and less personal Lighter and Softer direction in future albums. However, the album would eventually accrue a cult following and mass acclaim down the line, finally going Platinum in 2016.

The deluxe version of the album featured, apart from live versions and remixes, the following tracks: